What is considered to be a good waymarking?

The answer is one: “Waymarks that a hiker can easily understand and seamlessly follow”.
In this article series we will attempt to present the thematic of trail signage with examples and pictures.
In this article we will speak about waymarking with paint or small signs, that only indicates direction.

Waymarks are placed in such a way that they cannot be seen from hikers walking in opposite directions.
Waymarking aims at guiding hikers in a precise way, making them feel safe during the walk. Independently of the type of material that will be used, the way to put signs must follow some basic rules:

Using one set of colours on a network of trails is also considered to be best practice as it helps hikers recognise the trail network.

Painting must be done with much care

Paths of Greece has an extensive experience in waymarking, and it uses a specific system for waymarking, presented here below: 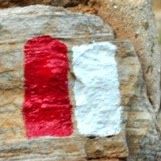 The two lines are coloured in parallel to the trail line, so that they give a directional information. White always gets on the side of the trail. 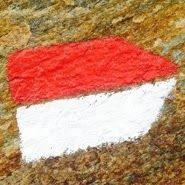 Arrows indicate a change of direction and should be visible only from the direction that they concern. 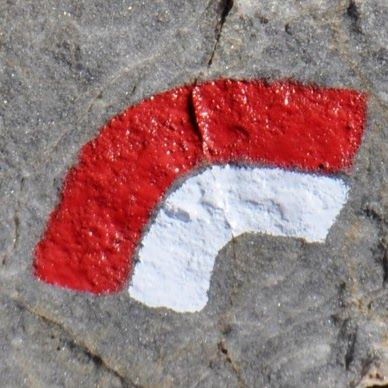 The curve is coloured only on the ground, it follows the curvature of the trail and indicates a change in direction. It is visible from both directions on the trail. It is used only f there is no possibility to use an arrow. 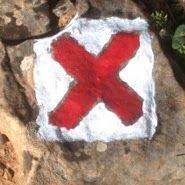 The “Χ” indicates a wrong direction and it is a particularly important sign for absent-minded hikers!